Driving in The Philippines 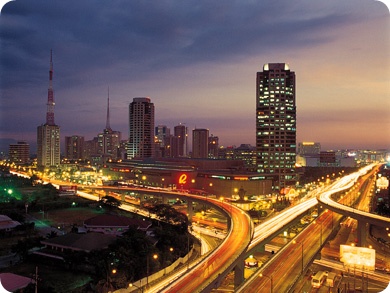 Philippines is known for many things: our mangoes, tropical beaches, welcoming people, and congested roads. Driving in the Philippines can be challenging for first time travellers due to the road conditions and local driving habits, especially if you are not yet acquainted well. Roads in key cities of Metro Manila are often crowded specially during rush hour (0700H to 1000H and 1700 to 2000H). However, having a car at your disposal will allow you to travel more independently, whether alone or with your family or friends. Anyone who’s ever been behind the wheel can’t deny the liberating feeling that driving provides.

If you’ve just landed in the Philippines and thinking of driving during your stay, here are some information to keep in mind.

Vehicles on the road include cars, trucks and buses, as well as manually operated tricycles and carts. Due to a lack of navigable sidewalks, pedestrians also use the road in most areas. During the rainy season, roads at higher elevations can experience landslides. Traffic signals and signs, often in English, are similar to those in Western countries, and traffic drives on the right. International car insurance is not usually accepted in the Philippines, and expats involved in serious accidents may face considerable difficulties.

Since traffic accidents are common in the Philippines, foreign drivers should be prepared for such an event. Luckily, due to the relatively low speed of traffic, most accidents are minor. However, for your peace of mind, it is advisable to purchase a Full Protection/Insurance Package when you rent a car. Foreign drivers should have a copy of their rented car’s registration, official receipt and car insurance policy in their vehicle at all times. In all cases, police officers are prohibited from charging or requesting fees for any services.

Road and Traffic Signs in the Philippines

Traffic signs warn you of possible dangers and provide information. They tell you what the rules are and what the road conditions are like. We highly recommend to download this Road and Traffic Signs document from the Land and Transportation Office (LTO).

Driving licences in the Philippines

Converting your foreign driver's license to a Philippine Driver's License

Obtaining a Philippine Driver’s License will not be difficult if you already have a valid driver’s license from your country. It is stated in the first paragraph of Chapter III, Sec. 21 of the Republic Act (RA) 4136, otherwise known as the “Land Transportation and Traffic Code”:

“Bona fide tourists and similar transients who are duly licensed to operate motor vehicles in their respective countries may be allowed to operate during but not after (90) days of their sojourn in the Philippines.”

You may only be allowed to convert your foreign driver’s license to Philippine driver’s license once you have stayed within a period of 90 days from the day of your last arrival in the Philippines. You can apply through the main branch of the Land Transportation Office (LTO) along East Avenue, Quezon City. The classification you must apply for is Non-Professional Driver’s License if you are not driving for a living (e.g. coach drivers, chauffeurs, etc.).

The importation of right-hand-drive vehicles into the Philippines is prohibited. Diesel-powered vehicles, including passenger cars, may be imported without regard to engine displacement or weight restriction.

Air-conditioning is necessary for safety reasons as well as the hot and humid weather, pollution and dust. Cars should be undercoated, tropicalised and equipped with heavy-duty springs and shock absorbers. A vehicle with high clearance is crucial for expats planning to travel outside Metro Manila due to frequent flooding and poor road conditions

PUBLIC TRANSPORT IN THE PHILIPPINES

Jeepneys were originally old converted military Jeeps left over from WWII. They have seating in the back and are flamboyantly decorated. The name is a combination of Jeep and jitney.  Jeepneys are a vital means of transport for Filipinos. It is the most popular and economical means of transportation. The colourful decorations of jeepneys embody Filipino culture, which make them iconic vehicles for the country. The designated routes of each jeepney are painted on its exterior. There is also a small placard in the front indicating its main destinations. Generally, jeepneys do not have proper loading and unloading areas. They will stop anywhere and anytime, which may prove challenging for foreign nationals who are unfamiliar with their destination. This is not an advisable mode of transport for expatriates who are uncomfortable with crowds.

Buses are a common sight on the major roads of Manila and in the distant provinces. Buses are classified as either air-conditioned or ordinary (not air-conditioned). The destinations are marked down on a large placard in front of the bus.  City buses are generally not recommended for expats as they can be very crowded. Getting off is also a bit tricky, particularly when one is not familiar with the area, because there are rarely any designated bus stops.

The train is comfortable and safe, and air-conditioned. Metro Manila has a regional rail service which extends to its suburbs and outlying provinces. While the national railways service that covers most of the country and for Long-distance train travel stopped its operational for many years due to old rails and trains.

Taxis are a convenient and comfortable means of travel in the cities in the Philippines. They are ideal for expatriates because it enables them to get around quickly and easily.  It is normally safer to hire a taxi from a hotel or from Car Rental Companies. Most hotels in the Philippines partners with Car Rental Companies like Europcar. Expats can hail taxis from the street, but they should make it a point to inform a family member or a friend of the taxi name and the plate number just to be safe. Most taxi drivers speak basic English, making communication easy. It is normal practice to give taxi drivers a small tip.

Air travel in the Philippines

DRIVING LAWS IN THE PHILIPPINES

Driving laws in the Philippines are meant to ensure not just an orderly flow of traffic and discipline among motorists but also the public’s safety on the road. We have laws that require wearing seatbelts and motorcycle helmets as well as those that ban people from driving when drunk and while using their mobile phones.

The most common driving laws are:

Metro Manila and other areas such as Baguio City, Cabanatuan, Cavite and Dagupan implements the Unified Vehicular Volume Reduction Program (UVVRP) or Number Coding Scheme. It is strictly imposed in most cities in the areas from 7AM until 7PM wherein vehicles with plates ending with a particular digit is banned on the road on given days (1 or 2 Mondays, 3 or 4 Tuesdays, 5 or 6 Wednesdays, 7 or 8 Thursdays, 9 or 0 Fridays).

Republic Act 8750 or the Seat Belts Use Act of 1999 makes the use of seat belts mandatory for both drivers and front-seat passengers of public and private vehicles. Back-seat passengers in private cars are also required to wear seat belt. A critical part of the Seat Belt Law is Section 5 that bans children under six years old from sitting in the front seat of any vehicle.

It has been a long time coming, but the government has finally passed Republic Act 11229, a law which provides for the Special Protection of Child Passengers in Motor Vehicles.

Let’s look at what this means:

1. Children are no lonhger allowed in the front sear, no exceptions.

No child 150 centimeters (4’11”) or less in height, or 12 years of age, is allowed in the front passenger seat. This is because of the danger of injury or death due to the front airbags, which, during a crash, expand at speeds of over 300kph, straight into your child’s face. Yes, this is potentially deadly.

For teenagers and adults under five feet tall, you may also want to consider having them sit in the back, or, at the very least, investing in a car with a two-stage front airbag or with a passenger airbag deactivation switch or trigger.

As a side note: UN Regulations actually allow the use of a rear-facing child seat if the front airbag has been deactivated, but local law does not make the same exception.

2. Babies must secured in a rearward facing child seat until they are 15 months old

As per UN Reg. 129, children under 15 months must be secured in a rear-facing seat. This is in contrast to UN Reg. 44, which only mandates rear facing seats up to 9 months, or some US state regulations, which mandate 12 months. For smaller babies that are difficult to strap into an upright harness, the regulation allows for the use of a side-facing carrycot. Do note, however, that this carrycot must be certified.

3. Child Seats measurement is based on height now, not weight.

Previous regulations for child seat use were based on weight. Children below 100-105 centimeters (under 3’5”) need to be in a rear-facing child seats, the type that usually have a separate base.

About Us
How can we help?
Services we offer
Top City Locations
Top Airport Locations
Sign up to Newsletter